Tobias: being discriminated against because of his skin colour 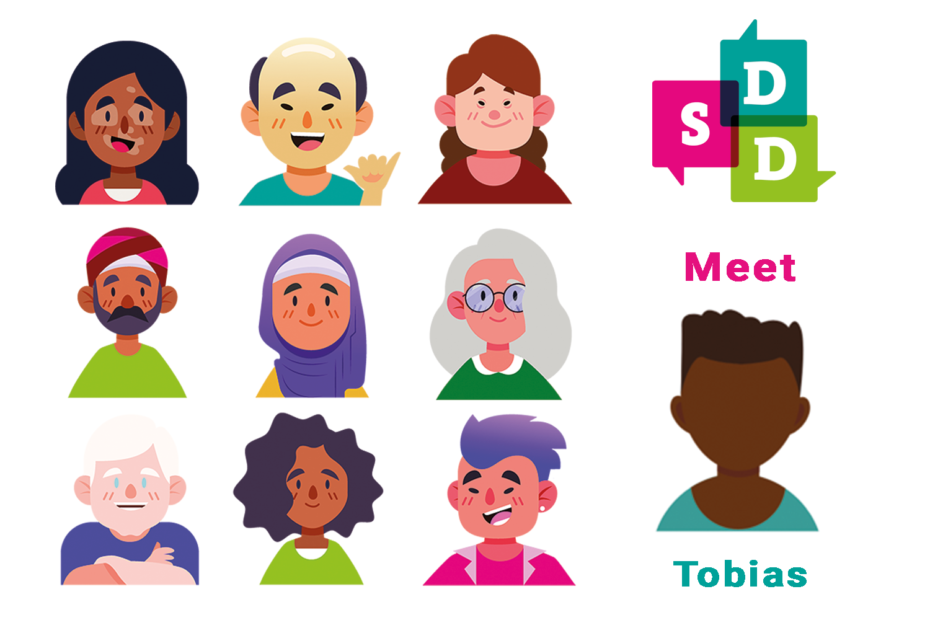 In the SDD (Smart for Democracy and Diversity) project, we will develop educational game scenarios based on the life stories of people who feel or are discriminated against.

Today we start with the first out of five personal stories, that are published in the SDD Compendium. The stories will be published every four weeks. Soon this sequel is over, it will be followed with the playing characters of the SDD game.

Tobias is in his early 20s and currently lives in a large German city. He grew up and went to school with his siblings in a small Bavarian town. After graduating from high school, he soon left the small town where he was living and moved to another city to study. His father is black and comes from Nigeria and his mother is white. He visits Nigeria once a year to see his family and acquaintances. His family also lived in France for a while. He describes himself as a political person and is interested in human sciences.

Tobias points out that as one of the few black people at his school and in his day to day life, he always felt very exposed. Racist comments, especially insults, have been the order of the day for as long as he can remember. He describes them as commonplace and potentially present everywhere. When he talks about his youth, he is visibly annoyed. In the big city, he says, life is much better than in the village where he grew up. It is more liberal, he says, and he no longer feels so exposed.

He was repeatedly insulted with the N-word when he was younger, even by his teacher, so much so that he felt he had to do something about it. Only a conversation between his mother and the headmaster was able to stop his teacher’s behaviour. Tobias recalls attacks and fights, for example during public events. He is sure that these attacks were often racially motivated. He also remembers people crossing to the other side of the street to avoid walking past him.

Examples of discrimination from his youth do not only concern him alone. For weeks, his father was being stopped by the police almost every day during his 40-kilometre commute to work, and was often late because of this. Tobias has also had extremely negative experiences with the police. They repeatedly stopped him for no reason as the only one in a crowd. He once had to submit to a body search at the station with his hands up. He describes this procedure as stigmatising because many people in the small town where he lived knew him. On a different occasion, one evening he and some friends were stopped at the train station. He was 17 years old at the time. The police had especially focused on him and found a very small amount of marijuana on him. He was taken to the police station and searched

several times. When talking to his mother, he was forbidden to speak French. The police officers then went to his home. His mother was no longer there as she was on her way to the police station. Nevertheless, the police officers, despite the fact that they had no legal right to do so, entered the flat and began searching his room. He describes this experience as traumatising and states that to this day he feels very uncomfortable when in contact with police officers.

His father taught him early on that he had to fight back and assert himself. Tobias says that friends have always stood by him. Strangers, on the other hand, often tend to ignore such situations.

He doesn’t trust the police and is sceptical about other institutions. He wished he had known about support services when he was younger and facing discrimination, but he was not aware of their existence. He considers information events held in schools, for example, as positive activities. He assumes that a lot of racist discrimination is due to ignorance and hopes that these educational initiatives will change this situation. In general, he does not feel comfortable in Germany. He says that he doesn’t really plan to stay there. Although he appreciates Germany’s stable job market and realises there are some financial advantages if he were to stay, he doesn’t want to feel vulnerable all the time. Visiting Nigeria is pleasant for him, one of the reasons being that he doesn’t stand out because of his skin colour, something that he finds relaxing.