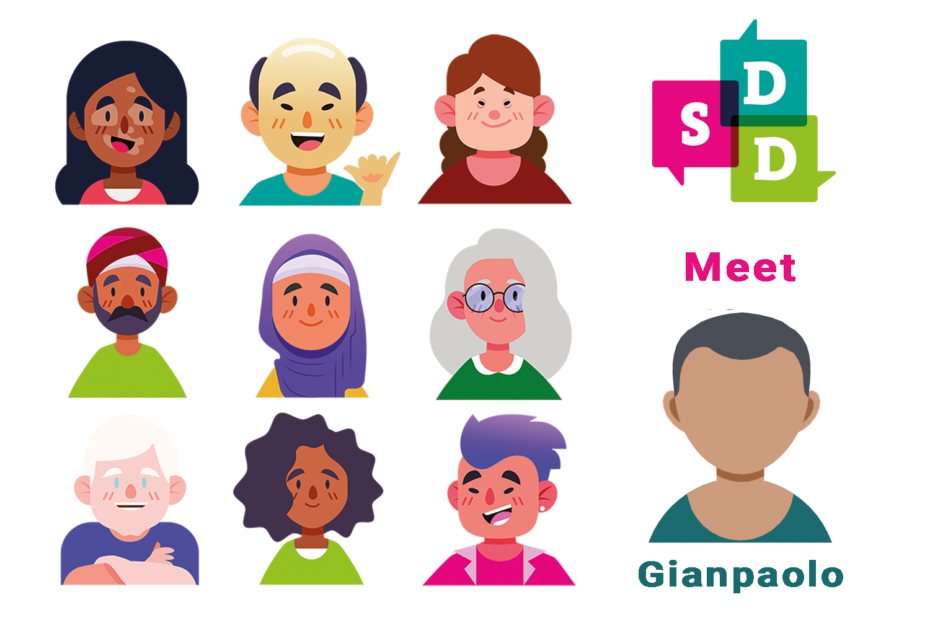 Today we continue with Gianpaolo, who co-founded the Italian LGBTQ+ movement and will tell us more about the discrimination and hate speech he experiences.

Gianpaolo, 67, is Italian, catholic, and works as a journalist. He comes from the Lake Garda area in Northern Italy. He is a co-founder of the Italian LGBTQ+ movement and former Senator and Member of the Council of Europe’s Parliamentary Assembly.

Gianpaolo has experienced many discriminatory situations throughout his life. Right after he came out as gay, in the second half of the 1970s, he had to face verbal insults in the streets of his small town, with the population more or less split into half between those asking for respect – including one of the local Catholic priests – and those distancing themselves from him, not talking to him anymore or even spreading lies about his lifestyle. The hardest part was facing the social pressure exerted towards his parents, both working class people who were forced into having to cope with something unprecedented for them. These experiences led Gianpaolo and others to start organising a gay movement and becoming politically active. In December 1980 he co-founded one of the first local groups in Sicily affiliated to Arcigay, to this day the largest Italian gay rights organisation. Gianpaolo’s work and the creation of the group were accompanied by physical attacks against Gianpaolo by right-wing extremists, just after two young gay guys had been killed because they had a relationship. Gianpaolo and his friends were seriously scared because they thought they were going to be killed. Gianpaolo says “I was afraid they would kill me too” and he recalls how the police first let the right-wing extremists “do their dirty job” and then intervened to supposedly help those who had been attacked.

When combating hate speech, and in this particular case anti-LGBTQ+ hate speech, Gianpaolo mentions what has been a collective effort by the Italian gay movement rather than individual victims’ reactions: when facing the AIDS emergency which was labelled the ‘faggots’ plague’, the gay community reacted by taking the lead with a widespread information campaign, among gay communities, in schools, cities and towns to advocate the use of condoms.

According to Gianpaolo, counter-information is crucial as a long-term strategy. In this case, it led to successful engagement by thousands of people who were able to network, convince people and build social and political majorities around the principle that the virus did not depend on sexual orientation but sexual practices, be they homosexual or heterosexual.

According to Gianpaolo, a crucial and, after all, successful strategy was to build a winning mass movement to campaign, advocate, study, inform, teach, take part in public debates and conferences, multiply the impact of information, lobby the media and politicians, discuss with the Catholic church as well as other churches. As they managed to reach their goals of dismantling HIVrelated prejudices and stereotypes and obtaining free medicines and medical care for those who were infected, people affected by LGBTQ+ discrimination turned into winners and have had their arguments acknowledged by public opinion, the media and policy-makers.

Gianpaolo has remained politically active in anti-discriminatory politics including hate speech situations in the new millennium. In 2007, when he was Senator, he spoke during a debate in the Senate on the abolition of death penalty in Italian military la, arguing that the refusal to accept death orders, in addition to being a right, is a duty, and expressed his solidarity to soldiers deserting the armed forces. The next day one of Italy’s leading conservative dailies published an article in its front page, signed by the newspaper’s editor, saying: “Senator Silvestri is a founder of Arcigay and loves deserters. Maybe because when they run away, they offer their asses.” After four years of legal battles, the editor was found guilty of homophobia and had to pay Gianpaolo € 50,000.00 in compensation.